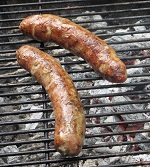 The weatherman was mistaken this weekend, and that led to Grillaz getting their hands on the best kielbasa on earth.  With the “guarantee” of a torrent, we did not make any plans for the weekend.  When an unscheduled beautiful Spring day happened along, we spontaneously hiked the Arnold Arboretum.  Then we were hungry, so we drove to D&J’s Market in Dorchester (south of Boston) .

A Lithuanian friend had recently told us about D&J’s Market where his family shopped when he was a boy, and he fondly remembered how good all of the fresh, homemade Polish food was.  The place is small and unassuming – very old school – and offers delicious Polish meats and cheeses.  We grabbed a couple of fresh, homemade kielbasas for the grill and a couple “Moscow ham and mazurski cheese on rye” sandwiches to hold us over on the drive home.  The sandwiches were great.

These sausages appeared to be what is referred to as biala – or white – kielbasa (we wish we had asked about what went into these).  They were light in color, were not smoked, and had no nitrates because they were not to be preserved but instead cooked and eaten fresh.  They were meaty with a nice balance of fat (many butcher shops add too much fat), and did not cause a lot of flareups when we grilled them.  We cooked them to an internal temperature of 155 F – perfect.  They had a nice texture, being less tightly packed than store bought kielbasa, which sometimes have a bit of a “rubber hose” tooth to them.  The taste was pleasantly more subtle than we were accustomed to, with a hint of black pepper that came through because these were not smoked.  Absolutely delicious!